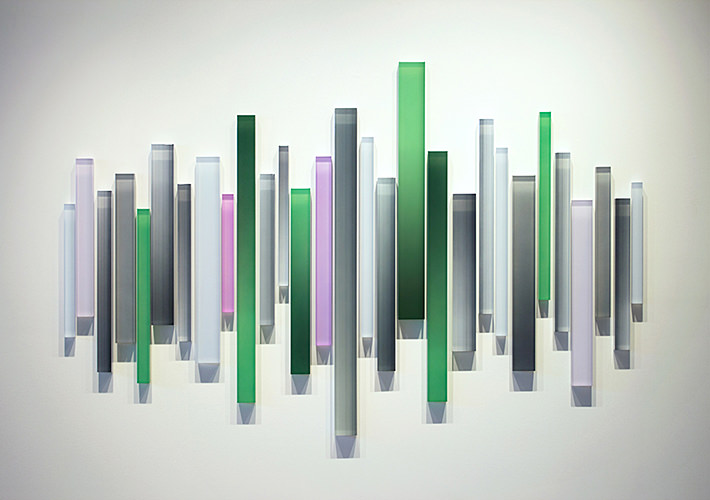 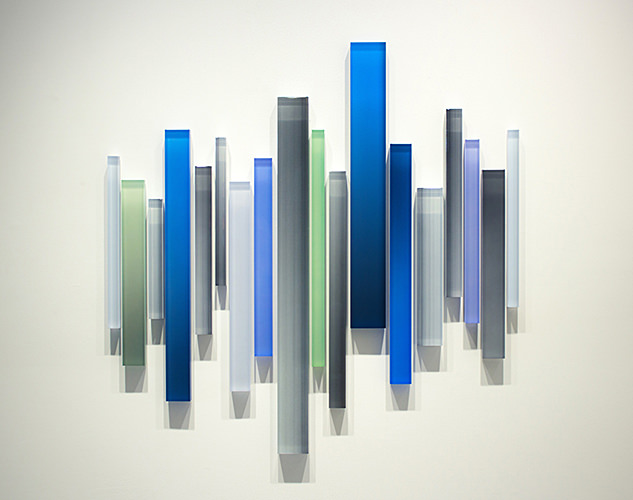 Brian Gross Fine Art is pleased to announce Slipstream, an exhibition of new wall reliefs by Bay Area artist Freddy Chandra, opening November 5, 2016 with a reception from 4–6pm. On view will be eight recently completed acrylic and resin based works exploring the luminous properties of light and color. Slipstream will be on view through December 23, 2016.

Chandra’s newest body of work expands on his previous series of uneven rows of painted acrylic bars set in staggered vertical and horizontal compositions. Through greater attenuation of his elements, increased modulation in the arrangement of the bars, and a more restrained color palette, Chandra’s work has developed in new dimensions.

Chandra has continued to expand his compositional repertoire to include horizontal works composed from numerous vertical bars tightly arranged in a staggered manner. These works contain a staccato like rhythm in their construction, where the eye moves dynamically from peak to valley to peak along the edges, while changes in the thickness and color intensity of the bars creates a push-pull response. Other horizontal and vertical works display a greater exploration of his previous works. Here Chandra has elongated his compositions, extending elements out to create expansive, less contained pieces. As a result, the role of negative space in these works has been emphasized.

Chandra’s use of color has also evolved for this series. Where he once used richly hued, multi-colored arrays of color, he now has employed a softer, more muted pallet to which he has added an individual bar of saturated color. Chandra deploys color as a means to dematerialize the edge of his works, using gradations of tone within the bars as a means to dissolve them at their extremities. These decisions about color and luminosity are driven by a desire to create a harmonic vibration within the overall composition.

Freddy Chandra is an adjunct professor at Mills College, and has previously been a Summer Session Lecturer at UC Berkeley. He is a recipient of a 2009 Joan Mitchell Foundation Painters and Sculptors Grant. He has also previously received a 2006 Kala Art Institute Fellowship, a Project Space Residency at the Headlands Center for the Arts in 2007, and a residency at the Djerassi Resident Artists Program in 2009. He completed an MFA at Mills College in 2004 and received a BA in Architecture and Art Practice at the University of California, Berkeley in 2002. Chandra lives and works in Oakland, California. This is his third exhibition at Brian Gross Fine Art.